Piste Improvements in Samoens and Morillon for Winter 2014/15

Domaine Skiable du Giffre (DSG), the company who operates the lifts here in Samoens, Morillon and Sixt have been beavering away this summer at many improvements for the lifts and pistes. Although the area boasts one of the best snow records in the Alps, the team are not resting on their laurels. Significant investment has been made across the ski domain with an emphasis on further increasing snow making facilities, and increasing the longevity of the snow to further improve skiing conditions at the start and end of the season.

I was invited again for DSG’s annual display of the piste and lift improvements this week, welcomed warmly with hot coffee and fresh pain au chocolates in the upstairs office of the Grand Massif Express. A brief intro from the boss, then we all jumped into the 4 x 4’s for our bumpy day ahead. Our first stop was Lac Bleu in Morillon to see the new pumping house next to the lake. Two massive pumps push the water from the lake up to Morillon 1100 to refill the lake used for snow cannons - massively increasing the snow making capacity.

Lac Blue is re-filled from a huge underground lake which runs from Sixt to Taninges so there is never a shortage of water! For those of you who have swum in the lake you will know its pretty chilly, 8 degrees centigrade in fact.  So when the head of artificial snow making said the water was rather warm (in snow making terms), I let out a little chuckle!

27 new snow cannons have been installed in Morillon this summer, 25 of them on the piste coming down from Morillon Les Esserts at 1100m to Morillon village – Piste Doina. This is great news as another of my favourite pistes is guaranteed snow much later into the season.

Back on the 4 x 4’s we briefly stopped half way up the piste from Morillon 1100 to Morillon village to check out some of the new snow cannons. Then we climbed up to Morillon 1100 and headed off road up the Marvel all the way to the top of Morillon ski area.  From here we headed over to Samoens Tete des Saix driving past the new much larger opening into the Marmotte run.  Opening up a bottle neck/busy area for sure, so you can glide more easily onto this great red run.

We passed the top of the Lanche black/off piste area where they have been busy cutting the bushes back. Why I asked? For two reasons came the response.  Firstly, less things to hit when skiing, but more importantly to reduce the possibility of avalanches.  When the snow falls the bushes bend and create a pocket of air stopping the layers of snow property bonding.

Loads of top soil and grass seeds were being spread on all the pistes that were still rocky. This increases the longevity of the particular piste, as you can ski on grass with much less snow than on rocks.  This again will further improve Easter skiing for sure. 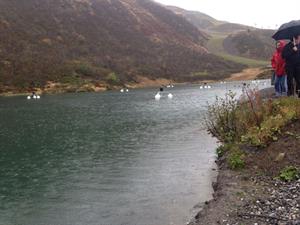 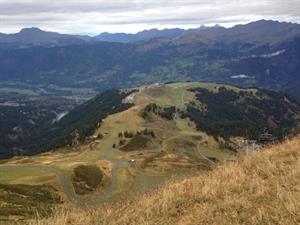 Lunch at Tete des Saix, with, of course a few plastic cups of quality french wine! Then we headed back down the piste Dahu and stopped at the lake half way down.  Here we saw the new ‘Robots’ in the photograph sitting on the surface of the lake, to churn the water all winter stopping it from freezing, providing much more water to the snow cannons again.  They have also emptied the lake during the summer and cleaned it all out, increasing its capacity significantly.

Then on the way back to Samoens we stopped for a shot of Kirsch as a digestif at Luge de Teran while being given a display of the snow cannons opposite!!

Other improvements discussed during the day included:

Reducing risks of avalanche throughout the ski area by installing more barriers to stop the snow slipping. Improving the junction between the Marveline and Marvel pistes. Improving the sledge run at Samoens 1600. Improved safety on the GME, and improvements on the pistes of Fontaine, Cascade and Grand Cret.

Huge plans for the Sixt ski area one step closer.  Discussed over a glass of vino with sketches on the back of a piece of scrap of paper - watch this space for more information!

A big thanks to all the team at DSG for a great, informative day out. It’s got me in the mood now so I’m dusting off the skis this weekend, checking over the kit, watching the snow forecasts and am delighted to see 20cm forecast on the upper pistes this week.  Bring on the winter! 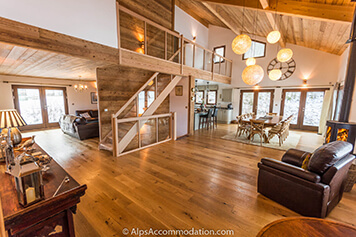