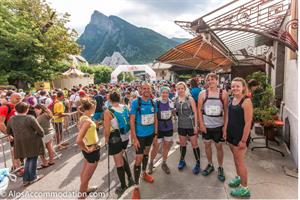 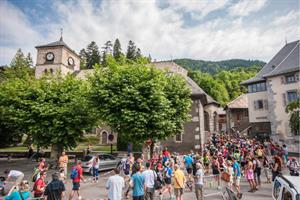 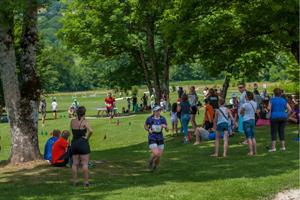 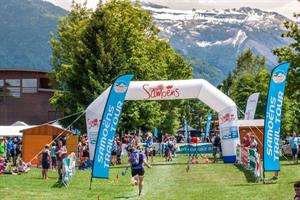 I’ve always been one of those people who felt I should run to get/keep fit, but until 2 years ago I never enjoyed it. I’d go through phases of running for a week or so before getting bored. However, in Spring 2013 I got myself fit through cycling, then gave running a go, and within a week I was hooked! Therein began my ‘running career’, running along the river for an hour or so 2 or 3 times a week, but never even considering the hilly trails. However, back in April 2014, I found myself entering the 2nd edition of the Samoens Trail Tour, taking place on 22nd June, thinking it would be a good excuse to get fit again for the summer. How right I was! On the lead up to the Trail Tour last year, I was fitter than I’ve ever been with training runs up to the Bourgeoise (over 1000 vertical metres). On one run I started running up towards Samoens 1600 thinking I’d just go as far as I could. I was rather surprised when I made it to 1600 two hours later! Who needs the Grand Massif Gondola anyway! Now I say ‘running’ as a very loose term. When you’re faced with trails as steep as they can be here in Samoens,there really is no hope of running up them all, so there is a lot of fast walking involved.

The Samoens Trail Tour is run by local people who are part of the Samoens Trail Team ‘Les Caias’ and Alps Accommodation are proud sponsors of this locally run non-profit event. It started in 2013 with just one tour available - a gruelling 60km run with 137 finishers. Last year they extended it and added a 30km and 19km tour. All distances started in the centre of Samoens and finished down at the lakes. They all also followed the same start, winding up and up to the Refuge de Folly at which point the shorter route turned towards home. But for those fit enough, and crazy enough, to take on the longer routers, there were still many refuges, peaks and cols to reach!

At 9.30am on Sunday 22nd June 2014, having fuelled up on carbohydrate-filled foods, I was on the start line with my good friend Katie, who had come all the way from UK for the race, and 200-odd competitors (the 60km and 30km races had started beforehand). The obligatory pre-race photo’s taken, and off we went! From the very start the trails were steep with very little opportunity for a breather except for the odd flat out exhilarating downhill section! Unrelenting the trails wound their way towards the sky. Katie, a veteran of several marathons, found it exceptionally difficult and despite fantastic encouragement from everyone had to withdraw. This highlights the great physical challenge offered up by trail running, and also the difficulty in terms of terrain and alititude while living in London! She will return to slay the beast!

Once Katie had withdrawn, off I went, probably pushing myself more than I ever had! (At this point I started meeting the leaders who were on their way back down!). The trail only got steeper, with the odd scrambling section thrown in! At the top, legs shaking from those scary steep sections and it's all downhill. The downhill is what I LOVE! A brief stop at a refuge to refuel, and off I went, galloping all the way back down to Samoens – swooping, jumping, sliding, but not falling thankfully! All that was left was a quick dash along the flat valley floor to the finish line. I have to say, I found this the hardest part! By this time it was gone midday, about 30 degrees, and having been in the trees and high up most the way until this point, this was a bit of a shock! I made it however, with a brief sprint to the finish, and ended up finishing 167th out of 222, with a time of 3 hours 53 minutes. The fastest male completed it in 2hours 12mins, and the fastest female in 2hrs 35mins. A cold beer awaited my arrival. OK, so probably not recommended after such a run, but in that heat it was very welcome!

To give you an idea of the times of the other races, the 30km had 231 finishers with the fastest male doing it in 3hrs 26, and the fastest female in 4hrs 11, and the 60km had 77 finishers, fastest male was 9hrs 15, and fastest female – 10hrs 50. Now I don’t know about you, but the idea of even walking 60km is enough to get the heart pumping, let along running it in that time!

The support throughout the day was amazing, from the marshals throughout the course, people just out for a hike, people waiting at various points, and then the support at the finish, it was all just incredible, I’ve never run anything like this before, and to have the claps, cheers and people shouting your name all through the race was such a boost (although the French do tend to struggle pronouncing Hayley! It made me smile a few times at some of the attempts!). I could have definitely pushed myself a lot more, the next few days I didn’t have a bit of aching and even went mountain biking the next day! I’m keeping this in mind for this year, I’m not planning on doing much the few days following!

Now to this year, again Alps Accommodation are amongst the sponsors of the Trail Tour, although for me it is a bit different, as a few months ago I wasn’t even sure if I’d be able to do it following knee surgery in November! It turns out I had done last year’s trail tour, and all the skiing, running and biking since Jan 2012, without an ACL and damaged menicus in my left knee! However, having had the all clear to compete in this Trail Tour, just 8 months after surgery, I am once again looking forward to this year’s Samoens Trail Tour. Having said that, I’m nowhere near as fit as I was last year, having not done an awful lot of exercise through the winter (no skiing!), I wasn’t able to start training until April, then with a generally busy spring, I haven’t done anything near the amount of training as I had done by this time last year. So it’s going to be a tough one!
This year, the organisers have once again added a couple more races, two ‘Verticale du Criou’ trails on Saturday 20th, the day before the longer ones, both literally going straight up to the Criou from Vallon. No turns, no hairpins, no downhill, just one long plod up and up! There are 2 options, either the 2.2km with an altitude difference of 1000m, or the other continuing further being a total of 3.5km and an altitude different of 1450m. I am once again signed up for the 18km, the ‘Trail découverte’, with 1200m of climbing on total. This trail as with the 30km and 60km, starts in the centre of Samoens, going along to Vallon, then opposite our new, recently renovated Chalet Toubkal the route suddenly jolts up into the hills above Vallon with a bang, meandering steeply up and up towards the Criou, until reaching an altitude of 1400m, before then traversing across to Le Trot, and descending through Le Mont, crossing the road to Sixt, through the gorges de tines, a brief rest on the flat along the river before a steep uphill toward Bémont. I think the legs might have a bit of a shock with this hill! Then back down the bike trails to finish again at the Samoens lakes, but not before having to run all the way around the lakes!

Training for this year has been interesting, having found myself in a couple of huge thunderstorms! I won’t have done anywhere near the amount of distance or climbing as I would have wanted, especially compared last year, but I can just do my best and plan a few easy days following Sunday! I hope to run it in 3 hours 15- to 3 hours 30 or thereabouts, but I’m not putting too much pressure on myself, I’m just glad I’m recovered enough after my surgery that I’m able to do it in the first place.

To give you an idea of where the other trails go, they all start with the same first 12km to the Sixt road. At this point, the 30km, ‘Tour de Giffre’, total climb of 2200m, goes up to Chalet de Porte, Tete de Roux and Vaconnant, before heading back to re-join the 18km route at Bémont. The 60km ‘Tour du Haut Giffre’, with 4600m of climbing, does a huge loup of the valley, following the 30km to Vaconnant, before branching off up to Samoens 1600, then the Tetes des Saix, before heading down to Morillon. If that wasn’t enough, they will then head up to the Bourgeoise, via Verchaix, across to Refuge de Folly and back down to the lakes!

This year there’s a few famous names amongst us ‘amateurs’, including probably the most famous trail runner in the world, Kilian Jornet from Spain, competing in the ‘Verticale du Criou’, as well as Swedish Emelie Forsberg, the 2014 champion of the Skyrunner World Series competing not only in the ‘Verticale du Criou’ on Saturday 20th, but also in the 18km ‘Trail Découvert’!

I’m looking forward to the gin and tonic after, and eating the cake I’m planning on baking the day before! Wish me luck!

If you fancy pounding the trails in your own time this summer, we still have availability for the summer, and many special offers on, for example, Chalet Toubkal, as mentioned earlier, sitting on the route of this years’ Trail Tour, is on offer for 1490 Euros, sleeping up to 10, with 4 bedrooms, incredible views, the largest garden of our portfolio of properties, and a hot tub, for 25th July, reduced from 1790 Euros!
See our Facebook page for ideas of what else there is to do in Samoens in the summer.

Follow up note:
Well I completed the trail tour yesterday! Perfect conditions, sunny but not too hot, great course with over 300 competitors in the 18km. I finished it in 3 hours 12 minutes! Faster than I expected, and the knee is still in one piece, despite some parts being incredibly slippery after a night of heavy rain 2 nights before! (I'm very thankful for the poles I decided to run with!). Thanks to all the well wishers! Looking forward to next years now! 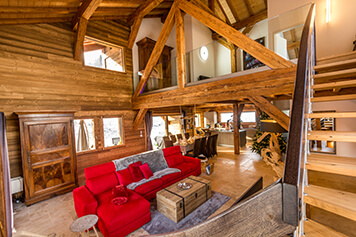 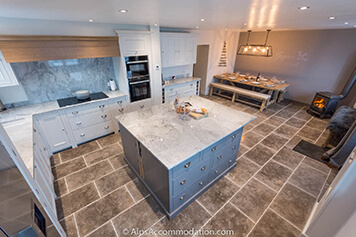